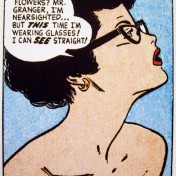 One of my all time favourite autobio comix practitioners is Eddie Campbell, he of From Hell and Bacchus fame. Most of his autobio stuff has been collected in Alec: The years have pants which includes The King Canute Crowd and How To Be an Artist. He is also a prolific blogger and always has interesting things to say on comics,… Read more » 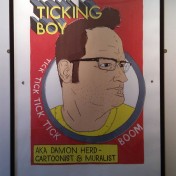 Some images from my degree show. The show is my billboard to introduce my comic The Adventures of Ticking Boy. 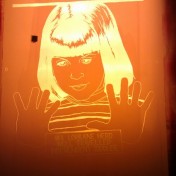 So, the deadline for my MA is almost exactly one week away. I have been furiously screenprinting and have had the luxury of having the screen printing room to myself (with the occasional visit from fellow MA-er Karolina). I am quite pleased with my BIG prints of characters in my comic, who are also members of my family. The… Read more » 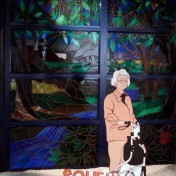 We took down The Space Between last Thursday, hard to gauge the success of the exhibition as it was mainly (for my part at least) in a shopping centre. I was pretty happy with the way my work turned out though and thought it worked well in the large comic panel-like windows of the shop I was in. Dealing with… Read more » 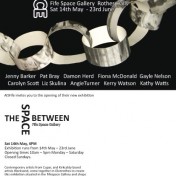 Flyer for latest exhibition The Space Between in Rothes Hall and Kingdom Centre in Glenrothes. 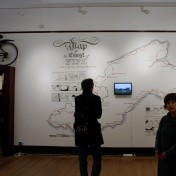 Apparently, one is supposed to update these things regularly, we shall see. Anyway, who is Ticking Boy? The short answer is me. In 2004 I underwent surgery to replace the defective aortic valve in my heart. My new carbon mechanical valve makes a noise like a loud watch and its constant ticking is a reminder of my own mortality. In… Read more »

Well, I might have wanted to start my blog on a cheerier note but in a way it is fitting that the first post is a commemoration of the one and only Harvey Pekar, who died on July 12th. Fitting in that, partly through his influence, I am now working on my own autobio comics under the title Ticking Boy…. Read more »