I am going to repost some posts from my old blog The Adventures of Ticking Boy as well as new posts. Here is the first old one:

Last Friday I had the joy of watching a wonderful interaction with my art.  I was invigilating an Open Studios event at Buckhaven Beehive when a women came in the door 5 minutes before closing.  She was an old-age pensioner with a wheeled shopping trolley. I realised immediately that she looked exactly like one of my pieces from Meanwhile that I had on display.  We were in no rush to close up so we stayed open so she could wander around the gallery at her own pace, all the time I was curious to see her reaction to my work.

There was no need to worry though, as she rounded a corner and saw it she immediately burst out laughing.  She could see the likeness and was amused and bemused to see herself in the work.  I had based the piece on several old women I had seen in the Kingdom Shopping Centre during the run up to the exhibition The Space Between, she could even have been one of them!

We got chatting and it turned out she was 90 years old and from Buckhaven.  Her name was Mrs Thomson and she remembered doing handstands in the hall as a schoolgirl, when her school used it as an overflow gym hall.  It was lovely to see her enthusiasm for the work (she bought a couple of small pieces by Ana Mellon) and delight in her recounting of old memories. Bless you Mrs Thomson you made the whole exhibition a success for me, even if I don’t sell any work! 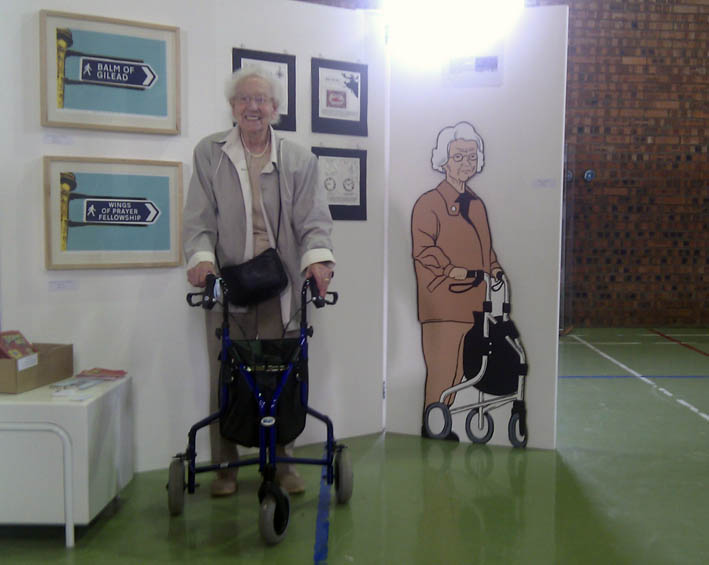 Mrs Thomson in front of my work.

Originally posted on The Adventures of Ticking Boy on 20th August 2012.